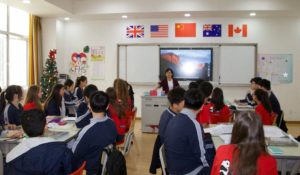 On Tuesday, we visited the Gold Apple Bilingual Boarding School. As we entered the school, we encountered student who were just having a regular school day. The school was gigantic and its campus is bigger than some colleges. There were kids attending the boarding ranged from ages 3-19.  After we finished lunch in the cafeteria, and finished our rehearsal, we visited a classroom. The students in the classroom were most likely our ages (high school students) and they were learning English.  After the teacher introduced us to the class, she taught them about relative clauses. For some of us it was like first grade, or more relatable. like taking a foreign language.  The teacher gave us all a worksheet and we all did the assignment. From this, we learned how we have inside jokes and so did the Chinese kids. However, we learned that there were many differences between their school and ours. Their school days are longer (I believe from 7:00 a.m. to 5:30 p.m.) and they have more classes. But in the classroom, it was shocking how they called their teachers by their first names, so instead of saying Mrs. Jones, the Math teacher, they would just say Eliza or something. The students also had little computer translator dictionaries to use in their work. Although in this classroom, the students didn’t seem to show much respect towards their teacher (they talked to each other while she was talking), Hai Yen (our Courier) told us that behavior is not usual.  Anyway, the Chinese kids are just like any other kid, they laugh, have friends, ask many questions, etc. When one of us (Sam) started speaking Chinese to them, they said to him in Mandarin, “If you are Chinese, why are you with them?” Sam explained that he lives I the US. Through this exchange, the Chinese kids, showed how they are not very aware of the diversity of the US. Overall, we all had a fun time interacting with them.

1 thought on “Kids: The Same Wherever You Go”