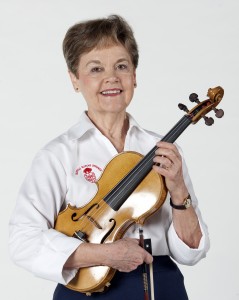 Buffalo Suzuki Strings exists today because of the strong pioneering spirit of our Founder, Mary Cay Neal. Mary Cay continues to be the inspiration, innovator and driving force which makes BSS not only successful but outstanding in our local musical community and in international Suzuki circles as well.

Mary Cay Neal studied directly with Dr. Suzuki on over a dozen occasions between 1969 and 1991, and has been an invited Clinician and Speaker at International Suzuki Teachers Conferences since 1972. She is an SAA registered Teacher Trainer and Master Teacher of Violin, and has also served on the Suzuki Association of the Americas Board of Directors. Mary Cay holds a Bachelor of Music degree from Georgia State University and has taught graduate and undergraduate courses in Suzuki Pedagogy at SUNY Buffalo.

“I was introduced to the Suzuki Method of teaching the violin when I was in college in the 1960s. Although Dr. Suzuki’s ideas were already well established in Japan, they were very new here at the time and highly innovative. I was captivated by his ideas as well as his ideals.

“What Dr. Suzuki did for me, personally, was to help me translate my convictions into a vital pedagogical method. He made me see that all children have musical potential and that it is the teacher’s primary function to help them develop it. Through Dr. Suzuki I came to understand that the challenge was going to come from teaching all children and not just the gifted few. At the same time it became clear to me that you can deprive a child of extraordinary future happiness if you say ‘no’ to them because they are not as talented as others. Perhaps those children will be future listeners to the Philharmonic, goodness knows we need them, but at least they will have had hands-on experiences of the instrument and the world of music is open to them.

“Dr. Suzuki taught us how to treat children with sensitivity; how to respect them and how to draw out their innate ability. He showed us how to talk to kids at their own level so that we can instruct them without being patronizing. Perhaps most important, he persuaded us that for student and teacher alike being happy with your music is synonymous with being successful.”