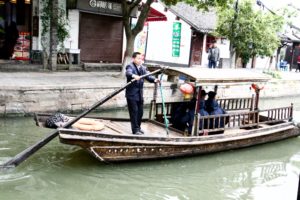 We spent our day in the ancient water village of Zhujiajiao. We started our day off with a gondola ride through the winding canals of the village. Although Dr. Pope-Namaste wanted to sit next to me, Ashley, Adhav, Arya, and Elena had the privilege. The gondola ride itself was pretty brief, but it gave us a chance to see Zhujiajiao. From afar, it looked like a very quaint village, but when we ventured through on foot, we truly saw its character. 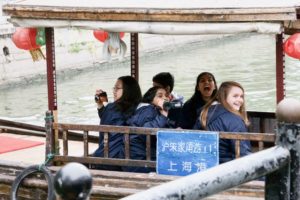 Through the crowded streets there was an array of street shops, like a flea market. The stores ranged from jewelry stores, to food vendors, to stores with assorted nick-knacks. Going to the street shops was definitely more of a challenge than I expected. It wasn’t that the vendors were stingy, but the language difference was an obstacle to haggling. To seem cleaver, Ashley asked in Chinese, “how much money?” But then the vendors though she understood Chinese. Eventually the vendors just gave us a calculator and we communicated through that. Elena was on the quest for the perfect ring, so we stopped in every pearl store. The pearls were very overpriced, tacky, and probably fake. We would walk into a store and walk right out. We even had some vendors begging for us to buy their merchandise, and lowering their prices for us.

Some of us were susceptible to buying name brands like Adidas or Abibas. Sam and I both bought a “Supreme” hat, for a

mere $4.00. On the other hand, Melanie bought herself a ukulele with the sole purpose of playing Jason Mraz. Elena bought a nice faux ring that she haggled down to 50% off. Adhav bought a Captain American fidget spinner. The greatest item that anyone bought was a rubber chicken purchased by Sophia!

Overall, the day was a huge success! By the way Mom and Dad, I didn’t push Arya into the canal. You should be very proud! 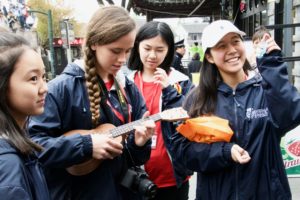 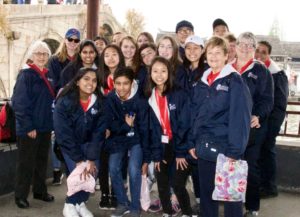