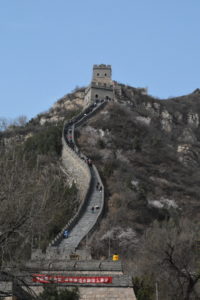 It’s 5:00 a.m. here in Beijing and the first chance I have had to sit for a minute and fill you in on yesterday. Let me say first, yesterday was amazing!  We left the hotel at 8:30 a.m. and knew we would not return to the hotel until after dinner.  We traveled first to The Great Wall!!. It was amazing to behold. All of the kids, and all of the chaperones walked the Great Wall. Now, if you have not visited it, let me tell you what that means. Imagine you are at the bottom of the longest and tallest on stairway you have ever seen. Now imagine it even higher. Then, imagine you add a two foot or more rise between the steps – you have to really stretch to reach the next step and use the stair railing to pull you up between each step. That’s the Great Wall. When you reach one tower – several hundred steps before the next, then you start the climb all over again to reach the next tower.  I don’t know about you, but in my mind – and from the movies I have seen of the Great Wall – I imagined that we would be taking a stroll along the smooth walkway of the Great Wall. I had no idea that the climbing skills of a billy goat were a prerequisite to walk it. Now to be fair, we were only at one small section of the Wall (it is well over 8,851.18 km – about 5, 500 miles), so perhaps there are some moving walkway type sections. I do know there are sections with ski lift-type access – but not here and not near Beijing. Our guides told us that people who make it up to that second tower are called heroes. We had a bus full of HEROES! I am so proud of them. All of the kids walked to several towers, and a few of the chaperones even made it to several towers. (In the spirit of full disclosure, only one person- a chaperone failed to make it up to the second tower. She made it up about 3/4 of the way and made the mistake of  turning around one too many times and looking down. That was it. She couldn’t go any further. It was me. No hero here!) I have asked one of the tour students to write a post on the Great Wall and I should get it later this morning and will post it whenever I have Wifi again.

We also visited a jade factory, had lunch there, watched a piece of jade being carved and polished, and then had an opportunity to do a bit of shopping there. One of the students will write about the jade factory too. After that, we headed back to Beijing. Once there we visited a historic neighborhood by rickshaw (!) and met with a woman and her family who lived there. She played a special song for us on an ancient Chinese instrument and believe it or not the song she played was the one the kids knew and are playing for their concert! Nothing happens by accident! The kids even sang along to her accompaniment which she really seemed to enjoy. From there it was off to a special dinner of Beijing Duck (no longer called Peking Duck) and back to the hotel. Then everyone immediately crashed.

Parents, do you remember when your kids were toddlers and you had this erroneous belief that you could take your kids to the park, run them around, and they would get so tired that when they got home they would be so worn out that nap time would be a breeze, only to learn that the truth was the only one worn out was you? Instead, we learned that the kids would still be full of energy and raring to go, go, go?  Well, that is NOT the case here in Beijing! When the kids got back to the hotel tonight, they were beat and welcoming bed time. So were the chaperones. Well, except for Mary Cay – as usual, she looked like she could still take on another tower at the Great Wall.

As for the rest of us, It was a hard day’s night! Yet, we are loving it. 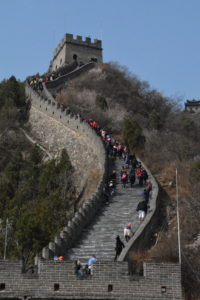 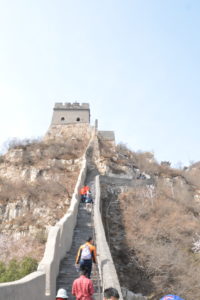 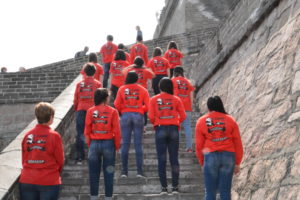 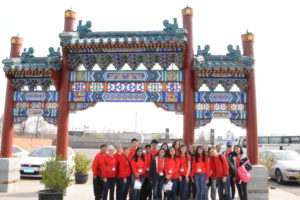 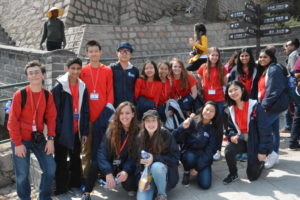 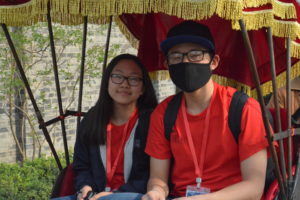 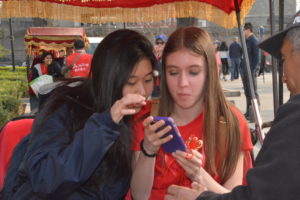 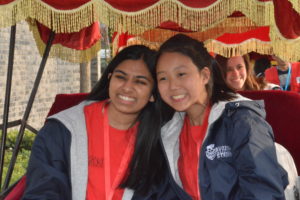