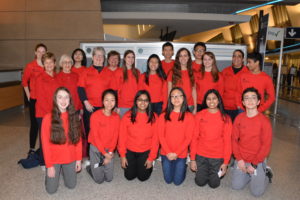 Was it really a day ago that we said a hasty goodbye at the Buffalo airport? In some ways, it still feels like the same day; yet, in other ways it feels like it was several days ago –L O N G days ago!  Not sure about you parents, but none of the chaperones got much sleep the night before, despite best laid plans. Yet, those feelings of fatigue flew right out the window when seeing the kids smiling faces as they gleefully anticipated this amazing opportunity to see China for the first time, or for a couple of the kids, a chance to return to China with a group of their BSS friends. In that way, for all of them, it is a once-in-a-lifetime opportunity!

For the parents, we did notice a bit of anxiety in your eyes even as you smiled, hugged, and said ‘goodbye’ to your sons or daughters. As I said at the airport, ‘Don’t fret, we got this!” Already, they have proven to us that they are ready for this trip and the spirit in which the BSS Friendship Touring Ensemble travels. They have been such good listeners, caring, thoughtful, and responsible.

We left the Buffalo airport and headed to Chicago. The flight was uneventful and on-time. We landed in Chicago and awaited what I anticipated to be a long and grueling five- (5) hour layover. It was a blur. The kids played card games and some digital game akin to the old (really old) television game show, Password. I never did learn what it was called. They grabbed food, drinks, and snacks. And a few of them were really diligent about studying or doing homework.  Before we knew it it was time to board the plane for our real destination- China! 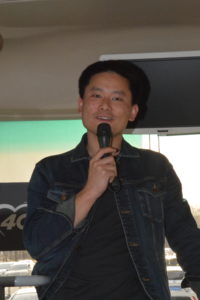 When we landed in Beijing the excitement was palpable – we are in China! We pretty much glided through both immigration and customs and met our ACFEA courier, Hai Yuen, and Beijing tour guide, Anita (I don’t remember how to spell her Chinese name – I will find out later) and headed to the bus. Since we arrived right in the middle of rush hour – (20 millions people live in Beijing! – now that’s a rush hour) we changed plans a bit and headed right for the restaurant. The restaurant was fun – we had special reserved rooms just for BSS.  The food was good and the kids were adventurous. Now, at home we would call what we ate Chinese food – but here in China it’s just food. Somehow in my head, that line was pretty funny. I don’t think it is translating to the page. Hai Yen, asked the kids before we headed to the restaurant if they liked Chinese food – they responded with a resounding “YES!” He told them that was great because they would be eating it twice a day for 10 days and then predicted that they would be begging for McDonalds before the end of the trip.  I’ll keep you posted. 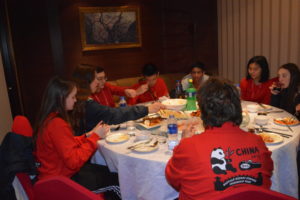 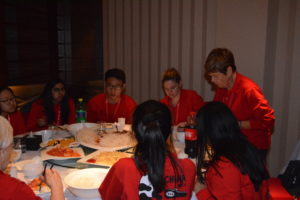 We went right to the hotel after dinner and we were very tired! The kids got all the luggage up to their rooms and most were in bed and nearing sleep before we even did our nightly room checks.

In the morning, we will spend the day enjoying the sights – the Great Wall is the highlight! We will also visit a jade factory and tour a Hutong neighborhood by rickshaw.  We will have a special Peking duck dinner in the evening. So, it will be a whirlwind day – another blur. However we will have photos and maybe even some videos to help capture it all.

Fun fact of the day – there are more people in China studying the English language than there are people in the U.S. Amazing! And kinda hard to wrap your head around.

I will continue to post to the blog when we have a free moment or two and access to WiFi. I will also have the kids provide text too. So, stay tuned.