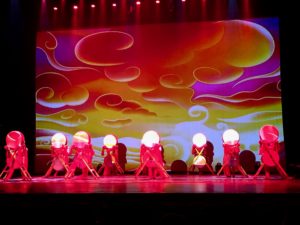 On Thursday, we went to see the Shanghai Acrobat show. It was really amazing!  For the first act, a group of women who did tricks and balancing acts with large drums. The second act was a man balancing on four poles. It was a writing theme act – so projected on a large screen behind him was writing he appeared to produce with a quill. He did these insane positions on a pole like turning his body sidewise in the air on a pole. Next was a hat act, where a group of men juggled their hats and did funny stuff with them. At one point, there was a solo part in the act, where a man was doing illusion tricks with a hat that was amazing. We were so mesmerized that we forgot to get a video of it. After, there was a woman who balanced a tray of wine glasses with her mouth. A small comedic act after that involved a chef spinning up to 16 plates on tables while another man kept adding tables of plates. Then there was an illusion act where a woman seemed to be puling cards from thin air. It was really fascinating!  I couldn’t figure out how she was doing it.

There was another act where a group of men did a bunch of stunts where they were balancing on each other’s bodies. Their theme was the Yin and Yang symbol on fire which reminded me of the Catching Fire book cover from the Hunger Games trilogy. There was another act of a woman balancing wine glasses only this time she moved into contorting positions while balancing a stack of glasses on her feet, hands, and mouth. The performer after her had a jungle theme and did moves that definitely had to put a strain on his muscles and joints, like spinning horizontally on one hand, or spinning vertically on his head. The chef came out for another comedic act. He asked for a volunteer from the audience and then made it seem like he would be throwing knives at him while he was standing against a wall. The volunteer was blindfolded and could only hear the pounding of the knives into the wall near his body, but the audience was in on the joke and could see that the chef was not really throwing the knife. I have no idea what the volunteer was thinking. The ended the show with a group of people riding motorcycles in a huge round globe. How they didn’t run into each other, I’ll never know. The show was really amazing. If I ever come back China, I definitely want to see the acrobats again! 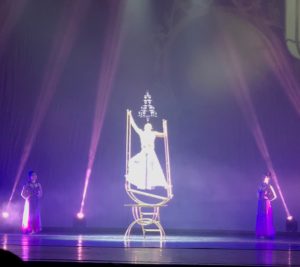 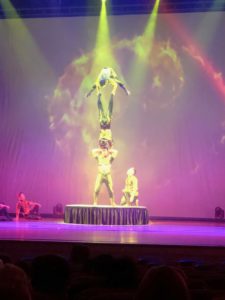 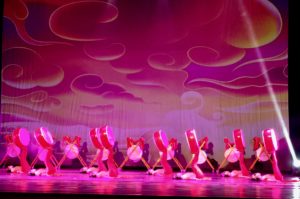