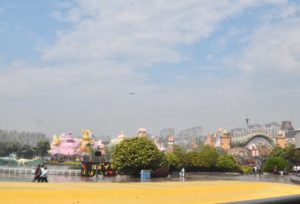 What I was expecting was a day of enormous rollercoasters overlooking the skyscrapers of China. What I got was an unsolvable maze of a so-called amusement park. Growing up in a family of three older brothers, I have been riding rollercoasters for as long as I can remember. I first rode the Superman at age seven while wearing my brother’s Heelys to reach the height requirement. While quite dangerous, I made it out safe; and since then I have been seeking out the highest of any amusement park I’ve attended. However, this Dinopark in China, was not what I was expecting. The rollercoasters were replaced by unreadable (to me) Chinese vender menus and kiddie dinosaur rides. Not to mention they all happened to be closed because of the rain on the day we were there. Elena, Ellen, Izzy, and I, therefore decided to explore the many food choices of the park – chicken and rice.

Finally, after traveling the entire park, we finally came across their version of a burger-joint. I ordered a chicken sandwich but was surprised with fish and tofu on the inside. I could not get this awful taste out of my mouth, so we decided on gelato. Gelato was the best decision ever! However, during our journey, we lost track of time. I looked at the clock; it was 12:20. Perfect! We had to be back at the front gate at 12:20. To make matters worse, all four of us had lost our maps. In most situations like this, you could ask for help or read the signs for the exit. However, in China this was a lot harder for us. A solid zero percent of people around us could speak English. We asked multiple people for help but only received greetings of Ni Hao (hello) in return. The only thing we knew was we were at the opposite end of the park and less than 45 seconds to reach the front gate. The four of us start sprinting – gelato in hand – with no sense of direction. We managed to pass the same point about four times. Finally, we found someone who worked there who spoke a little English – who gave us directions to a dead-end. Shoot! The time is now 12:25 we are done! Luckily to our amazement, we see the famous HiYen (our guide) flagging us down. Our tour guide managed to sneak us back to the group by 12:38. And overall, we survived Dinopark. 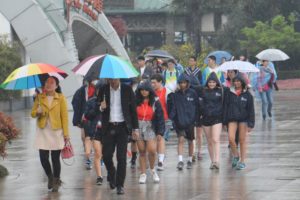 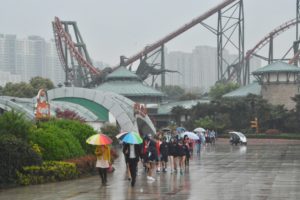 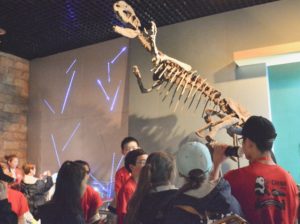 3 thoughts on “Adventures in DinoPark”