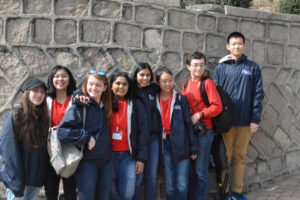 We were all excited to see one of the seven world wonders: The Great Wall of China. Our minds raced, ready to conquer the wall and become a “hero.” According to our tour guides, anyone who walked on the Great Wall was considered a hero. Ashley, Sam, and I soon found out what that meant.  We started fast, eager to get to the “top” of the section.  Not a minute later, we soon found out what being a “hero” meant: too many stairs.

Each step was a different height.  None were calibrated the same, some even being mid-thigh height. We climbed and climbed, and climbed some more; taking a couple of breaks along the way.  About the fourth tower in I turned and saw none of my friends behind us.  I asked Sam for the time, expecting to hear it was 45 minutes past 10:15, the time we started climbing; but it was only 10:40. Groaning, we continued on. When we made it to the top, the sight was breathtaking! The scene was stunning; all the mountain tops were visible, the trees were visible on every mountain, and the 8 towers of torture were definitely worth it. If you don’t like stairs, you might have met your worst nightmare, but climbing the Great Wall is an experience I’ll never forget.

2 thoughts on “The Great Wall and Making Heroes”

Celebrate Our 50th Anniversary With Us!